The minute I got the idea to write on this topic I was like you know what I’m gonna wait it out, because I’m supposed to go out with this guy (the one that likes pancakes!) and I don’t want him to read this. And then I stopped. This is something I’ve been doing since the age of 13, when the signs of pcos first showed up.

It has never been easy, it’s still not.

For those of you who don’t know, pcos is short for polycystic ovaries syndrome. Meaning you have multiple cysts on your ovaries and it results in hormone dis-balancing. The number one thing about pcos is that no one actually has the exact same symptoms you do and you’re never quite on the clear how “bad” your condition is or what lottery of symptoms you’re going to get oh yeah, and it’s also untreatable.

For me it manifests in the a bit higher testosterone levels, meaning I have lot more hair than other people and I have huge mood swings, huge boob difference in size and really irregular periods, like once every 80 days. I had an episode where my hair started to fall off a lot, but having so much dense hair, it’s not noticeable at all.

Even right now, before writing every single word, I take a deep breath and convince myself that it’s okay. Although it’s very very hard talking about this.

At the age of 13, when the first symptoms showed up, it was very hard to hide them and kids being cruel as they are, they bullied me for the longest time. And that ruined me. It made me fall into deep depression leading to self-harm, and afterwards to social anxiety all together. I spent every single day at the councilor’s office. In high school, one of the teachers said to me: Don’t come to the excursion if you’re going to be like this, you’re just going to ruin it for everybody.

I once had a guy run away from me after seeing my face. It’s probably the most hurtful thing that has ever happened to me.

But now things are different. We’re grown ups. I don’t have a lot of people asking or saying something about the way I look. About my beard in particular or my boom difference but I do know a lot of people are wondering or want to ask.

Even when I was a teenager, it never bothered anyone who was close to me, not even my boyfriends. But that feeling, when you go to family events, and we all know how Balkan people are, they comment and say things like that: “Omg, a friend of my friends’ had the same problem this is what she did you should try it!” And at that moment you just wanna disappear.

It became a huge insecurity for me – the way I look. People, including my own mother, were astonished at how sure I was in my professional life, becoming a freelance writer at the age of 16, but how deeply insecure I was in the way I looked.

There were 2 years I didn’t go to the beach because I couldn’t shave as fast as my hair grew.

But growing up, things changed. They became better, a year ago, my mom and dad got me the lumea (something like laser hair removal, tho not quite), because I tried everything till then. And it kinda works, on my legs for now.

Things got better. I realized that me having a beard does not define me in my femininity. I decided that I won’t let it define me. It still scares me, because it always shows – it grows so fast no matter how much I shave, wax or whatever.

I took like 6 breaks while I’m writing this. I’ve never written something so open and so vulnerable, but I feel like once I say it it’s gonna get even easier for me to handle it.

One thing, or one situation which I need to say is the following: It’s time for me to return from the States, after being on a plane for 24 hours straight, with no shower or anything else for that matter, I come home to my boy, who picks me up from the airport.

One of the first things he said to me was: Please go shave. I shave every day I don’t understand what the problem is.” The problem was that I was too tired and didn’t want to pretend like I don’t have a beard. THAT was the problem. The problem was him not accepting me for who I am, beard or no beard. And that thing hurt like a motherf*cker.

Never, ever had a guy said anything to me like that. Especially not someone that I was dating. And I had guys whom I was with for 5 years (when the symptoms first showed up) and a guy I dated for 6 months with whom we spent every week together and of course, you can’t always be your perfect self.

And it tore me down. Of course I ended whatever thing we were. Of course I’m not going to let some shallow assh*le devour my persona. But for a second I did. It hurt me so much, it reminded me of who I was in my teenage years. This broken little person with no guidance and no self-respect.

I’m not that person anymore. That’s why I kindly said F*ck you and moved on. Because no matter how much every single woman on this planet fakes it – being perfect, wearing make up and having the perfect body, we all have our imperfections and if we can’t show them to you, then you my friend don’t deserve to be in our lives.

Being a careerwoman, being a person, being a woman, still to this day I wonder if someone is going to say something about the hair on my chin and to break the ice, I say it. Because I got comfortable with it. Kind of. I accepted it, but that doesn’t mean I don’t do everything in my power to stay hair-less.

It seems easier to me when I say it. It’s down there in the open and the elephant in the room is gone. But I needed a lot of therapy and guidance to reach this point and I’m still not even close where I want to be in my confidence. But I work on it – just as I work on my projects and poor my heart and soul into what I’m doing, I put effort into accepting who I am. I’m Soph with a beard, with a mustache, with hyper personality who is rocking her career, has amazing friends and people who support her for what she’s doing.

Her looks do not define her and when she doesn’t have a beard she looks freaking awesome. And I’m super proud of her, for finally speaking the truth after 7 years of torture and pain and disrespect towards herself.

Sometimes, it’s better to accept who we are then to pretend we’re perfect.

And even at this very moment I try to breathe and have tears in my eyes knowing that everyone is going to read about this. So be it. I believe that talking about things is a better coping mechanism than staying quiet. And if I say it first, there’s kinda no meaning if you say it second. Your words can’t hurt me if I’m okay with this.

And I don’t care if the boy I like reads this. I don’t care if the high school bullies read this. I’m not that person anymore. I can say whatever I want it to say. Yes it still makes me cry, being my biggest insecurity ever (I for one, never cared how much I weight, tho that is another symptom of pcos, like higher chances for diabetes and cancer and sh*t like that) but I’m never letting it define me.

If you can’t see what a great person I am, how much I’ve accomplished in my life and you only see my beard then I don’t need you in my life. I have the people who accept me for who I am and to me, that’s more than enough.

So, this goes out to all women and men who feel insecure about something. Accept yourself. If it’s something like my thing, then sorry but you can’t change it. It’s always going to be a part of you and although I’m still not at the point where I can say: “Hey I’m completely okay with having a beard”, but with each day I’m getting there.

Sure, I will forever try to change this because being a woman with a beard is not normal, but it’s something I have to deal with being a part of me. And each day I’m one step closer.

So there’s just a quick reminder not only to love yourself, but the right people will love you for who you are – they won’t care if you look or do a certain thing. Even more so, your flaws are a perfect filter to get to the right people. And that is something that not everyone has. So in a way, it’s a gift.

This has been the hardest thing I’ve ever had to write and there’s so much more to say, but for now I cried enough and I’m getting ready to go out. 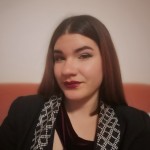 Heavenly hell: Living with my parents for a week in Ljubljana

Being emotional without emotions: A short, bittersweet guide to Boyne City and my life right now

An overdrive of thoughts